Fall for these local pumpkin treats

Quick, Cute and Healthy Back-to-School Lunch Ideas for Moms on the Go

5 Health Tips for Surviving the Fall

Free and Super Cheap Outdoor fun for Preschoolers this Fall

Build on the kids’ (hopeful) excitement to be back in the classroom with a fall weekend visit to the University of British Columbia, and the Beaty Biodiversity Museum. You can gain extra mom and dad cred by adding on a tour of the UBC Botanical Garden’s Greenheart Canopy Walkway.

Opened in the fall of 2010, the Beaty Biodiversity Museum is Vancouver’s natural history museum, with a mission to inspire an understanding of and promote responsibility for the biodiversity of our province and our world. The Museum displays over 500 natural history exhibits, showcasing specimens and collections of all manner of animal and plant life found on earth through the millenia. The specimens are organized into six collections, some of which were started by individual collectors more than one hundred years ago. The fish collection contains 800,000 preserved fish in jars, while the fossil collection has over 20,000 specimens, some of them 500 million years old. The other collections house specimens of mammals, birds, reptiles, crustaceans, sponges, insects and plant life.

The biggest attraction at the Beaty Biodiversity Museum, in both size and ‘wow’ factor, is the massive 26 metre long blue whale skeleton suspended in the middle of the Museum. The skeleton is from a whale that died and washed ashore on PEI on the east coast in 1987.

The process to reclaim its remains and transport them across the country began 20 years later in 2007. The Blue Whale Project story is both fascinating and a testament to the dedication of the UBC scientists involved. Do spend some of your Museum visit watching Raising Big Blue, the documentary behind the skeleton story, which plays daily in the auditorium.

Marvel at the Beauty

The skeleton is awe-inspiring – it’s massive, and you can’t help yourself marvelling at the beauty of its structure and design. The skeleton floats in the museum space so effortlessly that it’s hard to believe the whale would have weighed 150 tons when it was alive.

The Beaty Biodiversity Museum is staffed with enthusiastic volunteers, eager to provide information and interesting facts about the museum’s collection of animals, plants, and the topic of biodiversity. Need to blow off some steam after visiting the Museum? Fancy a walk 65 feet (20m) up in the air?

A high-flying tour of the trees awaits at the UBC Botanical Garden Greenheart Canopy Walkway. The canopy walkway is an aerial trail system that allows visitors to access the forest canopy with minimal impact on the trees or habitat.

You can walk the 310-metre canopy walkway at your own pace, but a 45 minute guided tour will open your eyes to the world above the coastal forest floor of red cedars, Douglas firs and grand fir trees. Guided tours are hourly, but arrive early to ensure a spot at the time you wish.

Learn About the Unique Forest Eco-System

A canopy guide will highlight the unique forest eco-system that you don’t notice or see from the ground, such as the special licorice ferns that only grow midway up mature fir trees. Or the bright green seed pods of maple trees that can be boiled to make a tea for drinking.

The bouncy nature of the metal walkway may take some getting used to, and smaller children or those with a fear of heights may have some initial jitters. But it’s worth persevering, especially to reach the highest point of the tour, the 65-foot watchtower. Here, you can peek through the canopy to catch a glimpse of the mouth of the Fraser River and Georgia Straight. Keep your ears open for a wide variety of bird life in the garden, and watch for signs of woodpeckers at every dead tree trunk.

Hours of operation may vary by season. 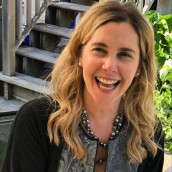 Claudia lives in Vancouver. She's the mother of two teenage boys, and has a thirst for travel, chocolate, and pineapple margaritas. She writes and blogs as thetravellingmom.ca, offering a modern mom's guide to family travel sanity. She is much too active on Twitter as @travelling_mom.