The sweet celebration of doughy deliciousness was initially established in 1938 by the Salvation Army and is held annually on the first Friday in June – that’s June 3 this year. To help you pay homage to the donut deities, we’ve compiled a list of the best local spots in Metro Vancouver to check out with your kids. From sprinkled sensations to decadent delights, there’s something for every family member.
Get out your stretchy pants, brace yourselves for the inevitable sugar crash, and get ready to Donut All Day.

Mochi and donuts combine to create a taste sensation at Mochido, the first to bring the hybrid mochi donut to Vancouver. If you’ve yet to try one of these culinary creations, you can expect the fluffiness of a donut mixed with the chewy texture of mochi. Current flavours include Ube Leche Flan, Salted Egg Yolk, Churro, and more. The iconic Pon de Ring design (made up of eight pull-apart balls) and decorative glazes make these donuts almost as much fun to look at as they are to eat.

Family-owned Duffin’s Donuts has been a Vancouver staple for more than 35 years. Their well-priced classic donuts are available in dozens of varieties. Bonus – they’re open 24 hours a day, Saturday to Sunday, and 6 a.m. to midnight Monday to Friday. So, the next time you’re dreaming about donuts late at night, look no further than Duffin’s Donuts.

Their There is a natural wine and coffee bar that also serves up dream-worthy donuts baked daily. While their donut varieties are on rotation, their current feature is the London Fog Mochi Donut with an Earl Grey glaze and a lavender shortbread crumb. Enough said. Donuts are known to sell out quickly at this Kitsilano café, so plan to go early to avoid donut disappointment.

In the heart of Chinatown is where you’ll find Mello, a fan favourite donut shop specializing in brioche style sweets. From Vanilla and Lemon Curd to Cereal Milk and Matcha, there’s something for every donut lover. Check out the cashless store in-person or pre-order online via email. And, if you thought Mello couldn’t get any sweeter, a second location in Kerrisdale is expected to open in summer 2022.

A hands-down favourite of many Vancouverites is Cartems Donuts. Here, creativity knows no bounds as flavours are brilliantly combined to produce mouth-watering masterpieces like Mango Coconut, Rose Wine, Smoked Maple Walnut, and Earl Grey – their best-selling flavour. Cartems has both yeast and cake donuts, with several vegan and gluten-friendly options. Even as the business has grown and expanded over the years, you can’t deny their commitment to making the best donuts possible.

Since 1979, Lee’s Donuts has been serving up delicious donuts at their iconic shop in the Granville Island Public Market. Their commitment to using only the freshest ingredients is obvious with just one bite of a classic Lee’s donut. Check out their impressive range of flavours – Chocolate Crunch, Cookie Monster, Jelly Filled, oh my! – but go for the old faithful Honey Dip if you’re in need of inspiration. Be prepared to wait in line as the sweet aromas attract many a tourists.

Looking for a quality coffee to go with that delicious donut? Then, Lucky’s Doughnuts is the place for you. Started in 2012 as a sub-brand of 49th Parallel Coffee Roasters, Lucky’s Doughnuts is known for its innovative and seasonal doughnut flavours (check out Peanut Butter and Jelly or Lemon Meringue Bismarck) but you’ll also find the classics like Cinnamon Sugar Old Fashioned. Lucky’s Doughnuts are made in-house at their cafes, including the latest in North Vancouver’s Lonsdale neighbourhood. Vegan and gluten-friendly options are available.

Donuts and fried chicken are a match made in culinary, high-caloric heaven. At Cream Pony, you can enjoy both. Cream Pony offers an array of brioche style donuts, including classics like Maple Dip and Honey Cruller, and seasonal creations like a vanilla cake donut with a touch of lavender for spring. Their fried chicken is equally to-die-for so throw caution to the wind and indulge your tastebuds.

If you’re familiar with Harmony Donut Shop then you know why the term “hidden gem” was coined. Located at the top of Lonsdale in North Vancouver, Harmony occupies a tucked away shop that’s practically bursting with sugary goodness (and vintage memorabilia). At $12.50 for a dozen of their cake donuts, you’d be a fool not to get a full box. And, as your kids enjoy donuts topped with colourful glazes and sprinkles and you enjoy the brief silence, it will indeed be harmonious.

How about a donut with a side of celeb-spotting? Honey Doughnuts & Goodies is beloved by both locals and stars (just ask Google), who all flock to the Deep Cove spot for their donut fix. While the café offers plenty more than donuts, it’s hard to resist the European-style baked goods that come in flavours including Chocolate Maple, Cinnamon Sugar, Honey-Glazed, and Maple Bacon. Grab that donut, enjoy the breathtaking seaside view, and get ready to have at least one thing in common with Kate Winslet.

What do you get when you bring together the masterminds behind Bruncheria and Royal City Donuts? Donuteria, featuring sweet and savoury grab-and-go bites and brioche style donuts. The New West concept donut shop features classics like Vanilla Glaze and Cinnamon Sugar, along with creative delights like Raspberry Frosted Swirl and Double Chocolate Oreo.

There’s lots to love about Doughnut Love. This Coquitlam business was started by a husband-and-wife team who shared a dream of opening up a gourmet donut shop in their hometown. And as Doughnut Love prepares to celebrate its first anniversary in June, their dream has become a sweet success. Donut varieties change monthly with current flavours including Baha Sunset, Coquitlam Crunch, Cookie Dough Old Fashioned, and more (vegan and gluten-friendly options are also available).

At Hillcrest Bakery & Deli, decadence is taken to a whole new level. Their gourmet offering consists of a classic donut that’s been cut in half, filled with icing and then topped with tasty toppings. Be sure to try the S’more Doughnut which features a Long John filled with buttercream and marshmallow icing and topped with a chocolate and graham cracker crumble. At $3.25, it is worth every penny. Fun fact: Hillcrest Bakery & Deli is White Rock’s oldest business.

Let your imagination run wild at Boca Grande Donuts in Delta. The donut shop delivers the goods with picks like Funfetti (stuffed with Funfetti cookie dough!), Netflix n Chill, Donut Pizza, and much more. Launched as a home business in 2019, Boca Grande quickly gained a faithful following and soon after expanded to a brick-and-mortar store. There you’ll find delectable donuts along with tasty taco kits. Gluten-friendly and vegan options are available, and be sure to check out their “Boca Poco”, aka. mini donuts.

No matter where you go to get your donut fix – or whether you say donut or doughnut, – one thing we can all agree on is that these Metro Vancouver spots are all pretty a-glaze-ing.

Do-nut forget to tag us at #vancouvermom so we can share your favourite spot! 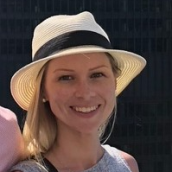 Born and raised on the North Shore, Lindsay loves calling this picturesque part of the world home. After having spent more than 12 years working in a PR agency, Lindsay hung up her heels and stepped back to focus on life at home with her husband and two girls. She’s still figuring out what she wants to be when she grows up, but you can bet it will involve writing … and eating cookies.