There is nothing like warming up with an oooey-gooey yummy cinnamon bun on these wet Vancouver spring days. Even the pickiest of littles could never resist the scrumptiousness that is a cinnamon bun. Here’s the Vancouver Mom Top 5 for cinnamon-ey goodness: Grounds for Coffee on Alma

It boasts that they are “home of the world’s best cinnamon bun”, and we would find it hard to disagree. Handmade daily with locally-sourced ingredients that are trans fat-free and without hydrogenated oils, bleached flour or preservatives. Pair with a perfect cup of fair-trade coffee and drift away to paradise.

This gem serves up cinnamon buns every Wednesday and offers a whole range of 100% GF treats. They’ll even deliver! This Whistler fixture’s recent expansion brings their love of all things homemade to Vancouver. The cinnamon cream bun consistently gets rave reviews and they can be found at the Nat Bailey Winter Farmer’s Market as well as their storefront locations.

Solly’s might be best known for their authentic and addictive bagels, but breakaway from the usual and sample one of their toothsome cinnamon buns smothered in delectable caramel sauce. Add cream cheese frosting for extra indulgence.

The home of the “Frissant”, a devious combination of croissant and fritter, but their cinnamon buns are equally tempting. Sample the European style cinnamon roll or the traditional cinnamon bun and pick up a loaf of their artisan bread to take home. 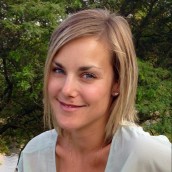 Elizabeth is a business planning guru who is passionate about working with female entrepreneurs, translating their big dreams into reality. Westcoast born and raised, she is lover of all things BC and needs a daily dose of nature to stay sane as a mother to three completely rambunctious children. She is a runner, a devoted drinker of coffee and wine, and committed to finishing last winter’s knitting project.