What to do in Vancouver: Three Things to do Over Christmas Break

Every Christmas Eve, we bundle everyone up and head over to Trinity Street to walk up and down the street and enjoy the annual display of Christmas Lights. It’s close enough to feel like part of our neighbourhood, but far enough that we don’t walk up and down the street often, so the displays are a surprise. It’s free, which is always a plus during the expensive month of December. And it’s a friendly, neighbourly experience. Every group of people we pass has a “Merry Christmas!” to share.

A couple of years ago I was researching the Trinity Street Christmas Lights for a Vancouver Mom holiday guide and I discovered that the annual display started after the murder of two Trinity Street residents in a home invasion in 1999. Neighbours decided to get together and do something to show their solidarity, to show that this was a community that wasn’t going to be broken apart by a tragedy. The annual display of Christmas lights was born. Today it is a contest for best display, voted on by those who come to walk up and down the street. You can buy a ballot at several local businesses, and proceeds go to a non-profit organization in the neighbourhood.

One thing I love about holiday traditions is how the sameness and structure helps the unusual things pop out in my memory. Like the year my eldest saw a Santa with an eye patch and declared him Pirate Santa. Of course, Pirate Santa says, “Yo ho ho!” Har, har. Or the year my youngest, barely a toddler, saw a giant inflatable snowman snowglobe and declared, “Nee-No in a Bo Bo”, which we promptly translated as “Snowman in a bubble!” and celebrated as her first sentence. I love that these memories are embedded in the backdrop of our community here in Vancouver, and the very local holiday traditions this neighbourhood enjoys.

Here in Vancouver we have lots of choice for local holiday traditions, including the Bright Nights Christmas train in Stanley Park, the Festival of Lights at Van Dusen and many others. Whether you go all out and splurge on a sleigh ride with Santa on Grouse Mountain or keep it local by looking at Christmas lights in your own neighbourhood, there’s a Vancouver Christmas tradition for every family. 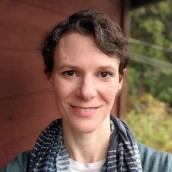 Michelle Carchrae is often asking those important life questions: "who moved the scissors?", "how would you do that differently next time?" and "are you finished with the glitter glue?" Homeschooling two girls, ages 6 and 3, is her full time job. The rest of the time Michelle can be found blogging at The Parent Vortex, hiking in the forest or knitting and reading simultaneously. She recently published her first ebook, The Parenting Primer: A guide to positive parenting in the first six years, and moved to Bowen Island.